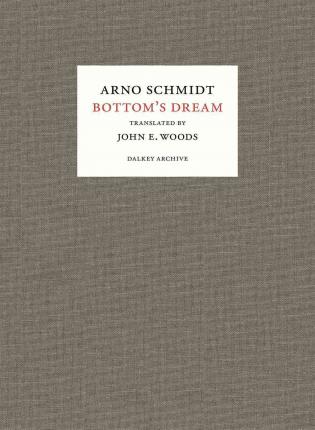 Thirty-five pages into my “Bottom’s Dream” adventure (it starts on page 11) and the number of subjects I could address in my second blog post are many, etymology, etyms (another day), dream analysis, Freud, sexual allusions, slang and so much more all filling my bulging notebook. The book is an absolute wonder of riches, if you take the time to dwell.

Last week I looked more at the structure of the novel, the idiosyncrasies of the language, abbreviations, the connection to Edgar Allan Poe and the other literary references. Today I will explore the Poe link a little further, simply pointing out numerous Poe references that take place between pages 26-42.

As previously mentioned the main characters in “Bottom’s Dream” are Daniel Pagenstecher, an Edgar Allan Poe expert, Paul and Wilma Jakobi, Poe translators, and their sixteen-year-old daughter Franziska. Much of the text I have read to date is taken up with debate amongst the characters about Poe’s writing.

Note – for all of my “Bottom’s Dream” posts it may appear as though there are typos in the quotes, I have transcribed them exactly as they appear in the text, there are numerous word plays throughout, with smaller references to the main text a number of these may not appear relevant, however I will do my best to keep them in tact here.

Since my last post the Poe discussion continues, we have Wilma, on page 26, referring to “QUINN”, who is Arthur Hobson Quinn, author of “Edgar Allan Poe: Critical Biography”. Who is debunked as an “>ordinarius< – (as the pedestrian name itself reveals) – is a >common< man! – nothing more than an >elevated teacher< for tots about 20:”…”Granted, most ‘re well-suited to the cold, wan effrontery of periodically publishing their collected lectures, and having these, rather superfluous, products declared to be books: the frostiest notion ever to come into a paper head.<<”

Two pages later another Poe critic, Marie Bonaparte (“MB from here on”) entering into the debate between Wilma and Paul, whilst, the much older, Dan woos the young daughter Franziska with a magic ring.

A quick reference is then made “Fate, (whose name is also sorrow) HELEN ii)” being a reference to Edgar Allan Poe’s “To Helen” a poem that takes place between midnight and dawn, with a walk in an enchanted garden full of thousands of blooming roses.

Poe’s alcoholism is also brought to our attention, not simply through references to various tales, but through a left column reference:

Alciphron
Alcmaeon
(H)alcyon daze
alk : elk
alcove
Alcoran
alchemy
alcohol? The old Goth of Germany
would have understood it; who used
to debate matters of importance to
their state twice  : once when drunk
& once when sober – sober that they
might not be deficient in formality –
drunk, lest they should be destitute of
vigour!< (LETTER TO B – . ))

This quote is aligned to one in the far right column, which reads:

A whole section dedicated to writers of renown who enjoyed a drink or two (Goethe a swiller?)!! A little later…”POE veryvery=tidily converted his dipsomania into literature:?” (don’t forget “P I” refers to Volume One of “A Dictionary of Slang and Unconventional English”).

In this section there are references to Poe’s stories “The Cask of Amontillado” and “King Pest”. “The Cask” story telling a chilling tale of revenge in the catacombs in return for a taste of Amontillado, alcohol used as a trap. In “King Pest” two penniless drunken seamen, do a runner from an ale-house, the Jolly-Tar. Whilst escaping the landlord of the ale-house they run into the dark quarantined areas of London, during the outbreak of the plague. They break into a house where six people are sitting around a table drinking punch, all deformed in some way, and dressed in various stages of death garb (cotton, muslin, shroud, even a coffin);

“A sentence! – a sentence! – a righteous and just sentence! – a glorious decree! – a most worthy and upright, and holy commendation!” shouted the Pest family altogether. The king elevated his forehead into innumerable wrinkles; the gouty little old man puffed like a pair of bellows; the lady of the winding-sheet waved her nose to and fro; the gentleman in the cotton drawer pricked up his ears; she of the shroud gasped like a dying fish; and he of the coffin looked stiff and rolled up his eyes. (Poe “King Pest”)

A number of quick successive references to Poe and alcohol, a story where a victim is led to his demise by the offer of alcohol, a story where two drunk rogues, drinking punch from skulls are charged with treason and ordered to be drowned in a puncheon of ale. And then we have “The Narrative of Arthur Gordon Pym of Nantucket” where alcohol is in play when his life decision to sail the waves takes place, and of course being on the high seas the drinking is quite frequent.

As you can see there are innumerable references, plays on the word “Poe”, throughout “Bottom’s Dream”. When discussing the number of Poe translations that have flooded the market: “That p’tickular lemon’s been squeezed so=dry!” the far right column tells us to “(try POEmegranate<”.

Edgar Allan Poe’s only novel, “The Narrative of Arthur Gordon Pym of Nantucket”, which I reviewed yesterday, is referenced quite heavily in “Bottom’s Dream”. We have the terms “Anamoo-moo”, and “Lama-Lama!” quite frequently referenced, and in “Bottom’s Dream” there is debate amongst the main characters as to Poe’s knowledge of Hebrew;

>I do not purpose to interpret the various names or cries of these natives of the black isle, which flows with rivers of blood : to do that, we should need POE’s own associations, and these no one can supply! All we can say is, that cries like Anamoo=moo & Lama-lama remind us of infant babble<?<<

And there are interpretations of the native’s words as used in “Arthur Gordon Pym”;

Lama=lama “>> >Meat<, Dearwilma : luts’n’slutsa meat.” tekeli=li “>> ‘f You’ll check a list of Hebrew >colors<, You’ll find a >tekelth<- (with tee-aitch at the end) – which LUTHER falsely & on principle was wont to translate as yellow, bright yellow, yellow work, yellow silk< – it was at any rate >most radiantly =bright< of the – sapphire<.

how could’ve POE come up with this baroque invention?…

There are quite a few pages, reference and sections dedicated to the language of Tsalal, the language of the natives in “Arthur Gordon Pym”, including a debate about the possibility of Poe drawing these words, tales from THE BOOK OF MORMON as well as an argument that he would have received the information “of things Hebraic=etc from?<< CHARLES ANTHON. Besides a period where the three Poe experts are speechless, there is also a conclusion that for Tsalal, there are multiple meanings, “whole quintets of meanings resound in a muddle”.

As you can see this work is a book deeply embedded with Edgar Allan Poe scholarly knowledge, I suggest any future readers ensure they have the full collected works, poetry, short stories, the novel length prose poem “Eureka” and the novel “The Narrative of Arthur Gordon Pym of Nantucket”. The character’s discussions referencing Poe’s works that are relevant to their discussions at the time.

Today I haven’t referred to any of the other features of the first pages of this monumental work, the word play, etymology, dreams and so much more. To date a wonderful journey into a complex, multi layered and revelatory work, a journey I am thoroughly enjoying. I am aware that some of these posts may appear a little droll, however my learnings can only assist future readers of the book, even if it is for them to dismiss my thoughts as frivolous, or it may give them a handle to pursue more than I am personally able.

Next week I can assure you that I will have more interesting references than simply the Poe links, as I’ve recently been reading about Hungarian vampires, witchcraft, and how could have Poe been knowledgeable in all these works, was it through his life as a youngster in the theatre with his mother? More another time.