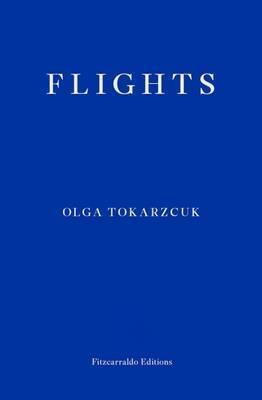 If you Google Horace’s quote you will end up with various interpretations, Wikipedia telling you “Those who hurry across the sea change the sky [upon them], not their souls or state of mind”, the Irish Times (and Goodreads) “They change their sky but not their soul who cross the ocean” and a lose interpretation by Robert Demaria Jr, in the introduction of Jonathan Swift’s “Gulliver’s Travels” as “no matter how far away you travel you are always stuck with yourself”, however intpreted I think it is an apt quote to use when talking about Olga Tokarczuk’s latest release “Flights”.

Whilst not strictly “epistles” per se, Olga Tokarczuk’s latest book is a collection of short stories, fragments or jottings, about the narrator’s travels, a seemingly random collection of vignettes, short pilgrimages, all related to journeys, some Biblical;

Standing there on the embankment, staring into the current, I realized that – in spite of all the risks involved – a thing in motion will always be better than a thing at rest; that change will always be a nobler thing than permanence; that that which is static will degenerate and decay, turn to ask, while that which is in motion is able to last for all eternity.

Using an engaging journal style, a raft of “travelling” subjects are addressed, transience:

Enormous airports assemble us together on the promise of connection with our next flight; it is an order of transferal and of timetables in the service of motion. But even if we had nowhere else to go in the coming couple of days, it would still be worth getting to know these spaces.
Once they were in outskirts, supplementing cities, like train stations. But now airports have emancipated themselves, so that today they a whole identity of their own. Soon we may well say that it’s the cities that supplement the airports, as workplaces and places to sleep. It is widely known, after all, that real life takes place in movement.

Every traveller’s time is a lot of times in one, quite a wide array. It is island time, archipelagos of order in an ocean of chaos; it is the time produced by the clocks in train stations, everywhere varying; conventional time, mean time, which no one ought to take too seriously. Hours disappear on an airplane aloft, dawn issues fast with afternoon and evening already on its heels. The hectic time of big cities you’re in for just a bit, wanting to fall into the clutches of its evening, and the lazy time of uninhabited prairies seen from the air.

Always the journey itself hovering, shimmering in the background;

Straight lines – how humiliating they were. How they destroyed the mind. What perfidious geometry, how it makes us into idiots – there and back, a parody of travel. Going forth merely in order to return again. Speeding up just to put on the brakes.

Our narrator has a fascination with the macabre, freaks, the inner workings of the human body, as a result her journeys include visits to museums, places where stuffed bodies are on display, remembrances of public autopsies, limbs, foetus’ contained in jars, there is a sense of our seeker wanting to understand the human body, if she can understand such, she can understand God, creation – “There is no other access to other people or to the world other than by way of the body.”

This is an ephemeral collection, with the very nature of transience forming part of the narrative, which is a collection of diverse voices, styles, blending fiction and essay, and tales across a multitude of locations, all questioning the sense of “home”.

‘In reality, movement doesn’t exist. Like the turtle in Zeno’s paradox, we’re heading nowhere, if anything we’re simply wandering into the interior of a moment, and there is no end, nor any destination. And the same might apply to space – since we are all identically removed from infinity, there can also be no somewhere – nothing is truly anchored on any day, nor in any place.’

Interestingly the original Polish title for this book is “Bieguni” and as Kapka Kassabova has explained in her review of this book in “The Guardian”, ”The bieguni, or wanderers, are an obscure and possibly fictional Slavic sect who have rejected settled life for an existence of constant movement, in the tradition of the travelling yogi, wandering dervishes or itinerant Buddhist monks who survive on the kindness of strangers.” The section titled “Flights” explores a ‘bieguni’ woman, living outside of a railway station.

With numerous references to ancient writers, travellers, Gods (for example Kairos) the threads of a seemingly disconnected collection of fragments slowly weave into a holistic rumination on human frailty, transience, home and time. A book that lingers, one that you could dip into and out of, although I was very comfortable reading it from cover to cover, like poetic works it is one that could be revisited ad-hoc – a travel “thought for the day”? Having been a follower of Olga Tokarczuk’s works in English, “House of Day, House of Night”, and “Primeval and Other Times”, two other titles I have read, I am very much looking forward to Jennifer Croft’s translation of the controversial epic “The Books of Jacob”, a book that won the Nike Award in 2015 (Poland’s pre-eminent literary award), just like this novel that took out the same award in 2008.