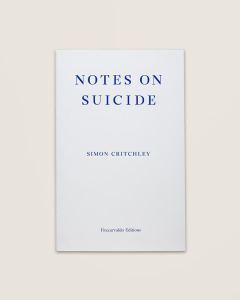 Suicide – an opening word, on a blog post, that will either fascinate, revolt, intrigue or cause you to reel away. As regular readers of this blog would know I have visited a number of works by writers who have taken their own lives, and most recently I read and reviewed Sadegh Hedayat’s “The Blind Owl”(translated by Naveed Noori), the Iranian writer who gassed himself in his small rented apartment in 1951.

The natural flow lead me to a book that has been sitting on my shelf since its release by Fitzcarraldo Editions in September 2015, “Notes on Suicide” by the English philosopher, Simon Critchley.

This short book contains four sections, exploring the religious and national views, community views, the suicide note and finishes with a section addressing the question “What if one simply wants to die?” The publication also includes an “Afterword” by David Hume from 1777 “Of Suicide”. Interestingly enough a writer explored a number of times by Jorge Luis Borges, whose “Labyrinths” I read just prior to Sedegh Hedayat’s “The Blind Owl”.

This essay opens with a reference to Eduard Levé and his novel “Suicide”, a book he delivered to his publisher ten days before taking his own life (I reviewed the translated version here). Early in the essay the subject of honest, open discussion about suicide is approached:

We lack a language for speaking honestly about suicide because we find the topic so hard to think about, at once both deeply unpleasant and gruesomely compelling. When someone ends their own life, whether a friend, a family member or even a celebrity who we identify with – think about the confused reactions to the deaths of Robin Williams and Philip Seymour Hoffman in recent times (although I suspect we could identify stories exerting a similar effect in any year) – one of two reactions habitually follow. We wither quietly think that they were being foolish, selfish and irresponsible, or we decide their actions were caused by factors outside of their control (severe depression, chronic addiction, and so on). That is, if they acted freely in killing themselves, we implicitly condemn them: but if we declare that their actions were constrained by uncontrollable behavioural factors like depression, we remove their freedom.

Against this tendency, I want to open up a space for thinking about suicide as a free act that should not be morally reproached or quietly condemned. Suicide needs to be understood and we desperately need a more grown-up, forgiving and reflective discussion of the topic. Too often, the entire debate about suicide is dominated by rage. The surviving spouses, families and friends of someone who committed suicide meet any attempt to discuss suicide with an understandable anger. But we have to dare. We have to speak.

Yes, this is a thoughtful and incisive insight into a subject that is often avoided, or uncomfortably discussed. A work that uses historical insights to show how has society moved from “admirable” suicide to a subject that is now considered taboo? Using self-reflection and open, honest musing (whilst the writer observes the coastline), this is a personal journey, why the fear of death, what has led us there?

Perhaps the closest we come to dying is through writing, in a sense that writing is a leave-taking from life, a temporary abandonment of the world and one’s petty preoccupations in order to see things more clearly. In writing, one steps back and steps outside life in order to view it more dispassionately, both more distantly and more proximately. With a steadier eye. One can lay things to rest in writing: ghosts, hauntings, regrets, and the memories that flay us alive.

As a philosophical essay the rhetorical is never far away, throwing up a raft of questions…”But how can I be autonomous in relation to suicide? Am I not making an autonomous decision to rid myself of autonomy?” etc. This is a probing, prodding exploration into a subject we too often sweep under the carpet. Naturally the subject of depression also plays a role here, as does a study of the “suicide note”;

One always speaks to someone in a suicide note. Suicide notes are attempts at communication. They are a last and usually desperate attempt to communicate – final communications. They are also failed attempts in the sense that the writer is communicating a failure to communicate, expressing the desire to give up in one last attempt at expression. The suicidal person does not want to die alone, but wants to die with another or others, to whom the note is addressed.

The final section of this essay addressing “What if one simply wants to die?” and touches on Robin Williams, Philip Seymour Hoffman, Kurt Cobain, Hunter S. Thomson, David Foster Wallace but returns to a more detailed study of Eduard Levé, the performance artist, photographer and writer who was used as an example to open this collection of “notes”

This is a thoughtful, maybe controversial and interesting publication, an essay that doesn’t get bogged down in melodrama, nor sensationalises a moving and controversial subject. It is only through continued discussions and questions, as posed in this essay that further debate on suicide can occur, hopefully progressing our understanding.  Yet another worthwhile release from independent publisher Fitzcarraldo Editions.